Last weekend, we drove into Brooklyn to celebrate my brother-in-laws 50th birthday, at the all mighty Peter Luger Steakhouse in Williamsburg. He is a steak lover and has always wanted to dine there, so my sister-in-law arranged a surprised dinner in his honor. There might have been a toddler style tempter tantrum thrown by him that resulted in this idea, which was one of the entertaining stories told over dinner, but I digress.

If you haven’t heard of Peter Luger’s, you most likely live under a rock, as there are few New York City restaurants as well-known as this steakhouse. The name itself is synonymous with steak, and they’ve been doing steak for over 125 years! Peter Luger has a few other proteins on their menu but don’t try to order them unless you want your waiter to scuff at you. They do steak, and by steak I mean porterhouse. They offer a “single steak for one” but as my husband and I found out when we attempted to order it (by our oh-so-rude waiter), “It’s not special…you need to order the steak for two”…..oh…um….okay. Then again, the waiter also seemed annoyed that we wanted menus. I mean, how often do you go to a restaurant where you are asked if you want a menu? Isn’t having a menu placed in front of you when being seated part of all dining experiences? Clearly, we were not ready for Peter Luger’s.

As you  can tell, our waiter was a pleasant man, which the restaurant is known for. (I hope your sarcasm font is working right now.) He brought all new meaning to the word rude, but it gave us something to laugh about as we sat around the table enjoying the yummy bread that was brought out by a different waiter, who had a great personality, by the way!  Speaking of bread, it was some damn good bread. The basket contained three different kinds, onion, oat and one with salt and caraway seeds on it, but don’t expect it to be served warm. It’s a good thing I workout, cause spreading cold butter on cold bread is not an easy task!

Peter Luger is also known for their bacon by the slice, so of course we all ordered some as an appetizer. It was truly delicious, especially when teamed up with their famous Peter Luger steak-sauce (which my husband said tasted like it had a cocktail sauce base). The only drawback to this part of the meal was once again our waiter, he dripped hot bacon grease all over my other brother-in-law’s girlfriend, with no apology at all. Oh…and many will say you have to order the tomato and onion as an appetizer, heck, your waiter will most likely guilt you into it as he did to us, but skip it. It’s not worth the $20 they charge for it and only one person at our table even touch it after it was served.

Back to the porterhouse, which they do their way. Your waiter will ask you how you would like that cooked when you order, but it doesn’t matter. You will get your steak served medium or rare and you’ll shut your mouth and like it. Thankfully, this was not a problem for anyone at our table. My father-in-law actually complained to us because he didn’t think it was rare enough, and of course it wasn’t because it’s served on a plate so hot you can keep cooking it right there at the table. You want it well done, leave it on the edge of plate to continue cooking!

The steak is served family style and comes to the table pre-cut. Your waiter will serve each person a few pieces and warn you not to touch the piping hot plate. He will then spoon the buttery/oily sauce that the steak arrives in over your slices, and if you are lucky, he will be kind and make sure that he is not dripping butter sauce into your beverage (unlike our wonderful waiter). The sides are also served family style at Luger’s. My husband and I ordered the German style potatoes, which are just hash browns. They were good, but would have been better if they weren’t burnt. The steak was very good, but lacked seasoning to me. I’m not a steak expert by any means, but I didn’t taste anything special about this steak…I guess I don’t understand the hype surrounding it. 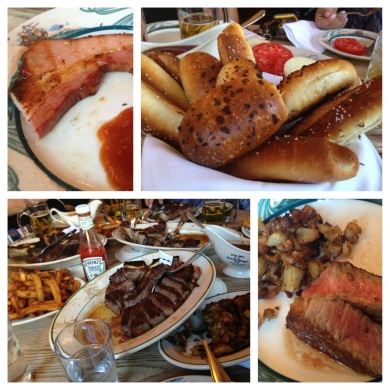 Despite being stuffed after our meal, we ended up ordering some Chocolate Mousse Cake and New York Style Cheesecake for dessert. I REALLY wanted to order the Holy Cow Sundae, which many around us were having, but there was no way the button on my jeans could handle that after all of the food I already ingested. Dessert is also served family style and comes with Peter Luger’s famous “Schlag”, which is whipped cream. Upon arrival of your dessert, the waiters toss gold, chocolate coins onto the table as a finishing touch. Too bad they can’t be applied towards the bill.

While this blog may seem like we had a horrible time, we didn’t.  Peter Luger Steakhouse is one of those bucket list experiences. It’s been one of Zagat’s top restaurants in NYC for over 27 years and people rave about it all the time. Being as we were born and raised in Brooklyn, NY – you kinda feel like you have to eat there at least once, and now we can say we have.

If you plan on going to Peter Luger Steakhouse just be prepared for a nostalgic, somewhat “German beer hall” atmosphere, wobbly tables, uncomfortable chairs, surly waiters, high prices and don’t forget to bring cash, because they don’t accept credit cards. Make sure you order the bacon, skip the tomato & onion, don’t order anything but the “steak for two” (or more) and save a little room for dessert.

Ultimately, it was a nice afternoon filled with beautiful skylines during the drive, family and lots of laughter.

Filed under Family Fun, My Ramblings