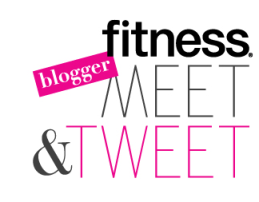 In one week from today, I’ll be in NYC attending the FITNESS Magazine “Fitness Blogger, Meet & Tweet” aka #FitBlogNYC!

Last night Brittany from Healthy Mom Runs, hosted a chat on Twitter for the people attending this event. During the chat, we discussed things like must have items to bring with you, what to wear and possible before & after meet-ups. It seems the important things are a phone charger, water and protein bars, which I had already planned on bringing. As for clothing, everyone will be sporting fitness gear and it looks like the one item everyone will be wearing is cropped black pants. (Good thing I received a pair for my birthday yesterday…I like to blend in at social events)

Some of the #FitBlogNYC veterans were kind enough to share their experience from last years event with us newbies. It appears that there were some hottie waiters in attendance last year and many are hoping they will make an encore appearance this year.

We were also lucky to have FITNESS Magazine’s Digital Director, Christie Griffin with us for the chat. She shared a few names of the speakers we can look forward to. I’m excited to say that I’ll get to hear @SmittenKitchen and @Possessionista  as well as Erin from @FitBottomedGirl, who will be offering tips on how to be a pro blogger.

Christine also tweeted that if we are runners, we should bring our favorite sneaks…which made me very giddy! She mentioned that we should bring sunglasses as some of the speaker sessions may be held outdoors, since it will be around 70 degrees and sunny. It was also announced that there would be workout option this year. I guess they only offered one last year, so people sounded excited about that. Of course all of this info was given to us with a disclaimer that is subject to change, but I’m hoping if it does, it’s only for the better!

Overall, it was an exciting hour well spent on twitter. It was nice to “meet” some of the other bloggers who will be attending, and to get a little bit of info on what to expect at this event. Hopefully FITNESS will release more info this week, as we approach the event. A lot of people were curious about who will sponsoring #FitBlogNYC this year and we were just told that they would be amazing as last year. I wasn’t there last year, but from what I’ve read, amazing is an understatement!

I’d also like to thank Wendy from The Weight Is Over, for starting a Facebook page for this event and keeping us all updated there!

Are you attending #FitBlogNYC this year? If so, I look forward to meeting you! Speaking of….I should probably go and check bus schedules and purchase my tickets!

3 responses to “I’m Getting Giddy!”