A few weeks ago when I was at #FitBlogNYC, Brett Hoebel was one of the speakers there. At the end of his lecture, he told us that he would be returning to NYC in early June to teach a Flywheel class, and if we were interested in joining to tweet at him. Of course I tweeted at him despite having no idea what a Flywheel class consisted of. As the days went by, I totally forgot about the class, until I received a tweet from Brett with a link to enter a drawing for the class. I filled out the entry form, said a little prayer that I would be selected and went about my day.

Two days before the class date, I received an e-mail saying that I was selected to attend Brett Hoebel’s inaugural ride at the Flywheel Flatiron location!! I was super excited and then panicked because once again, I was sick. I haven’t had much luck in the health department the past two months, but I was on day three of antibiotics so I responded that I would be there and started looking at which train I would need to catch.

The day of the event, I was very nervous. I had never attended a spin class before and I really didn’t know what to expect. I did a little research on Flywheel the night before so I knew it was stadium seating cycling, I knew that the room is kept dark to help you focus on making the ride your ride and I knew that there would be loud music and that I shouldn’t be afraid to ask for help when first setting up my bike. Ok…sounds good to me!

I caught my train into NYC and knew that I would be early so I packed lunch with me and upon arriving in the city, headed over to the Flatiron District. One of the my favorite buildings in NYC is the Flat Iron building so it only made sense to me to walk over there, grab a bench in Madison Square Park and just enjoy the view. 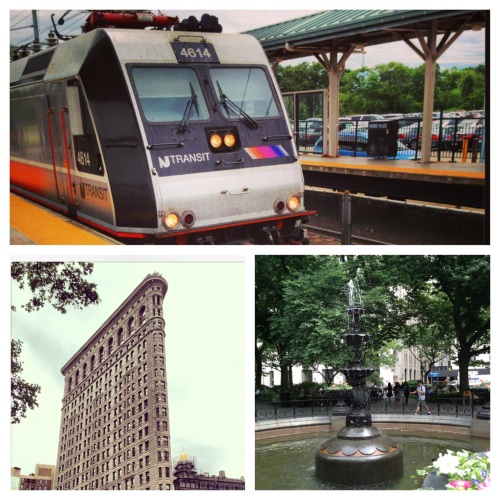 After lunch, I headed over to the Flywheel Flatiron location and signed in. I was given a special pair of spin shoes, shown where the lockers are and I grabbed a bottle of water and a towel.

On my way to the lockers, I saw Brett in the room we would be using talking to a few other people, so I popped my head in, said hello and snagged a picture of the bike set-up.

After stowing my stuff in a locker, I headed up front, said hello to few fellow bloggers and then it was time for class. I felt my nerves kick in as I selected a bike in the back and I was grateful to the gentleman in front of me who taught me how to snap my fancy spin shoes into the pedal. A girl who worked there came around and helped me adjust my bike, only we didn’t adjust it correctly, and I didn’t find that out until the class was already in full swing. Oops!

After Brett explained the bike display to us and how to adjust the torque, the room went dark. Only the instructor stage and bike’s display screen are illuminated so you can focus on the workout, and not everyone else around you, which I really liked. The class is a mix of fast, sprint intervals and slow climbs, which help to build endurance and muscle while burning a ton of calories. There is even an upper body segment to the class which really gets you sweating!

The music playlists for each class are created by the Flywheel instructor themselves, which I think is awesome. Instructors choreograph their own classes, syncing their rides to the beat of their songs ensuring a new experience every time you take a class. I loved Brett’s music selections since I’m a big fan of BPM on Sirius XM radio.

My favorite song from the workout was “Fade Into Darkness” by Avicii:

Brett guided our workout, suggesting resistance levels and RPMs, but ultimately it’s your ride, so you decide the pace of things by spinning the knob for more or less resistance on your bike. I had to dial it back a few times due to my seat issues but I still got breathless and had a crazy sweat going on.

Overall, this was one of my best fitness experiences in a group setting. Brett Hoebel is an amazing instructor. He is truly inspirational and it’s like he’s in your head as you’re doing this workout. Every time I felt like dialing back, slowing down or saying “I can’t do this” he would say something to ignite that spark within myself and I found the strength to keep going.

The class lasted about 45 minutes and we did a light stretch at the end of it, which was much needed.

As everyone was headed out of the studio, I snagged a moment with Brett to say hi again and to thank him for giving me such an amazing opportunity.

This was honestly the toughest thing I have done since week one of Insanity…although I didn’t curse at Brett like I did at Shaun T! I will definitely need to keep eye out for Brett’s return to NYC and try to catch another class. He truly is a phenomenal trainer!

After changing into dry clothes and collecting my belongings, I enjoyed another stroll through NYC, to catch my train back New Jersey. As I returned home I was filled a feeling of joy and gratefulness. I’ve been given a lot of amazing opportunities the past few weeks and each one has been an amazing experience.

Have you ever taken a Flywheel class? What did you think of it?